Observatorium 31 | 15.05.2019 | Going beyond an impact-driven assessment, a stronger, better defined and more accountable role of philanthropy within civil society may be developed. Funders and foundations as well as experts are invited to gather, align and apply a common framework which enables philanthropy to live up to its full potential. To this end, Philanthropy.Insight offers a pentagon of monitoring criteria as a starting proposition.

Disruptive dynamics of globalization, the technological revolution, and the crisis of democracy proliferate changes within society, to which all parties need to react. Trust is one of the major casualties, with negative consequences for social cohesion, democracy, and the markets. Philanthropy is not exempt from these disruptive forces which start playing out into different directions. While the number of philanthropists is rising in most OECD countries, their profile is changing. Their financial capacity reaches unprecedented levels, while the boundaries of investment and philanthropic activity are getting increasingly blurred. At the same time, calls for greater scrutiny of private giving are emerging, both in academia and the public at large. How to respond in order to preserve the licence to operate and maintain and strengthen trust in philanthropy? Philanthropy.Insight aims at monitoring philanthropy in a new way. Going beyond an impact-driven assessment, a stronger, better defined and more accountable role of philanthropy within civil society may be developed. Funders and foundations as well as experts are invited to gather, align and apply a common framework which enables philanthropy to live up to its full potential.

To this end, Philanthropy.Insight offers a pentagon of monitoring criteria as a starting proposition.

Under stress of disruption and given the loss of societal trust in institutions, institutional philanthropic players are called upon to align their financial capacities, their impact and their influence with a commitment to exercise trust-driven philanthropy. This implies active allegiance to and support of a political and economic system which enables philanthropists to empower citizen action.

To this end, a scoping study was launched at the Maecenata Foundation in January, 2019. In many discussions held with founders, academics, experts and aficionados of philanthropy, an evolving new understanding of philanthropy and an urgency to act was detected, in order to safeguard and strengthen the potential of philanthropy.

Since the end of the 20th century, disruptive dynamics are accelerating, producing significant transformations of social, economic and political structures. Globalization, new communities of choice, and high-speed technological innovation are reducing the previously dominant role of the state, while the private sector has become a major player in many sectors, from infrastructure and transport to pensions and health care systems. Technological inventions have transformed the pace of communication, revolutionized the way we work, and individualized how we spend our leisure time.

These disruptive dynamics are putting the concept of an open society under stress. Fundamental principles, i.e. the rule of law, human and civil rights, democracy, and cultural contexts, are being questioned. Global social inequality is on the rise. We seem to live in a situation in which uncertainty and mistrust prevail. The loss of trust in particular is felt everywhere, while differences between countries remain. Disruption as the new normal is here to stay.

Disruption is affecting civil society, civic action, and philanthropy as much as it does other sectors of society. Institutions of social interaction and participation, religious communities, trade unions, political parties, and other traditional membership organisations have lost critical ground. Social capital in OECD countries and beyond has been reduced. Multiple surveys show that the level of trust in civil society organisations, while considerably higher than in governments and businesses, hardly exceeds 50% and has decreased significantly since 2007. Some civil society players have demonstrated that they are not inherently good. Ideologies, interests and hidden agendas seem to be expanding fast.

III. Philanthropy in a Changing World

In philanthropy, a civil society subsector notable for its recent growth, the number of players has steadily increased. E.g., from 2002 to 2014, the already high number of foundations in the United States has increased by around 35 percent to a total of ca. 87,000 (Foundation Center 2014). Even in France, a country with fewer foundations for historical reasons, the number more than doubled between 2001 and 2014 to more than 2,200 foundations (ERNOP 2015). In particular, corporate foundations are driving this growth.

Likewise, the financial capital of the sector has reached unprecedented levels. According to recent (rather scarce) data, total assets of foundations exceed USD 1,5 trillion (Global Philanthropy Report 2018). And importantly, new philanthropists, especially those from the digital economy with exceptional financial capacities, have joined the donor community (s. the giving pledge).

The growing visibility, impact and influence of philanthropic action as an important part of civic activity has generated calls for a critical assessment, improved accountability, and above all an in-depth reflexion on the role of philanthropy in modern society.

A recent example for this mixed bag of attention could be witnessed, as philanthropic donations towards the reconstruction of Notre Dame Cathedral in Paris arrived. Literally overnight, philanthropists from all over the world pledged approx. 1 billion Euro. This attracted both gratitude and criticism, with no simple pattern of political alignments, nationality, or profession – within or outside the philanthropic community and civil society. Indeed, this “flooding of philanthropy” was referred to – and both criticized and hailed – as yet another indication of the demise of the welfare state in favour of voluntary charity of wealthy elites.

IV. What do Philanthropists do?

As civil society players, funded by private and increasingly by corporate donors, philanthropic endeavours do not operate on the margins of society, while benefitting from tax advantages. The range of activities and formats of philanthropy reflect the speed and complexity of change. Beyond traditional goals in charity and social services, health, education, research or arts and culture, modern foundations are engaged in many new fields, reaching from environmental and development action to the protection of human and civil rights, and from migration and gender issues to social inequality and climate change.

Many foundations are small and operate at a local or regional level. They pursue very specific operating and/or grant making purposes. There seems little reason to doubt that this is a legitimate exercise that may rely totally on the personal dedication and vision of the donor. However, an increasing number of philanthropic institutions have become international players and are obliged to recognize a special responsibility towards society at large, beyond national boundaries and certainly beyond the legal framework in which they operate. Their licence to operate depends on their acceptance as accountable, and value-driven agents, and it is this type of philanthropic institutions world-wide that Philanthropy.Insight wishes to address.

Some foundations, albeit a minority, have become drivers of innovation and change agents. They address and indeed develop public policies and criticize social developments, and do not hesitate to engage in advocacy. The chance offered to foundations, to experiment and accept failures may be seen as key advantages compared to the public and private sectors. Clearly, this does not always render them popular with governments, who object to their watchdog role and see them as unwelcome competitors in public affairs.

Philanthropy.Insight proposes to reposition philanthropy against the current environment of social, economic and political disruption and societal distrust in a two tiers exercise. As a first step, philanthropic action may be assessed, using five fundamental criteria (see chapter VI.). The criteria were assembled in answering the question what value-added philanthropic institutions can bring to the table.

In a second step, and picking up on the outcome of the first, a closer look may reveal the value base of individual philanthropic activity and permit some judgement as to whether and to what extent a particular philanthropic action is compatible with societal values. Taking the will of the founder and overall, potentially but not necessarily legal, requirements relating to the boundaries of the public good as starting points, personal experiences, operations failures, successes, and other factors may also be taken into account.

Furthermore, given that philanthropy is value-based by definition, but lacking a global general agreement on how these values are to be defined, individual cases can be assessed in relationship to different value sets.

Strengthening the value-based approach of philanthropy implies respecting common societal principles such as the rule of law, human and civil rights, and democracy, as well as specific civil society principles, such as respect for the individual, refraining from using force, accepting plurality and others. Ultimately, this paradigm may become an instrument of auto-evaluation and monitoring of large-scale international philanthropy.

The Philanthropy.Insight Criteria are to be understood as a systemic attempt to generate the essential criteria of a trust-driven philanthropy and its working practices.

Scholars as well as practitioners from the philanthropic eco-system across the OECD have worked together in seeking an assessment framework based on the validity of its theoretical contribution as well as its applicability in terms of working practice. Five core criteria have been defined: 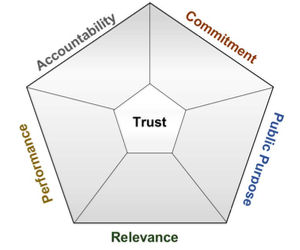 Each criterion is described briefly depicting its central thoughts and broken down into three qualities. The order in which the criteria are presented reflects a judgment with regard to their contribution to a trust-driven approach.

Conscious of the challenge of achieving a common understanding, we are suggesting three central questions for each thought in order to provide a starting proposition for the discussion. This open format reflects the intention of enabling a collective approach to arrive at a shared endorsement of the Philanthropy.Insight criteria.

Commitment addresses the question whether a philanthropic institution is living up to the essentials of the eco-system of philanthropy. Its underpinning qualities are Compassion, Understanding and Respect.

Public Purpose specifies that action has to be tailored to principles of benefit to society. Its supporting qualities are Goals, Responsiveness and Integrity.

Relevance underlines the necessity that action is conducted to make a difference and leave a mark. Its underpinning qualities are Sustainability, Effectiveness and Impact.

Performance refers to internal stakeholders acting in a professional manner. Its underpinning qualities are State of the Art Practice, Leadership and Dialogue.

Accountability accentuates the existent consciousness of a responsibility to society. Its supporting qualities are Transparency, Responsibility and Compliance.

The criteria of Philanthropy.Insight have emerged from the discussions held so far and appear to constitute a suitable focal point for launching a longer-term monitoring approach. Further discussions, dialogue and a more detailed and case-by-case analysis will be the working methods in the next phase of Philanthropy.Insight, in order to examine the value-added and utility of the criteria.

The ultimate goal is to create a tool by which foundations may evaluate themselves and their work against a number of principles and qualities of a trust-driven philanthropy, while the public will be able to engage in comparative and in-depth analyses, in order to identify strengths as well as areas for improvement. A productive dialogue with stakeholders, beneficiaries, policy makers and the public at large will be of essence.

As the disruptive dynamics will continue to proliferate, the demand for a compass of trust and democracy will not diminish. Philanthropy.Insight aspires to assist  foundations in  becoming valued members of civil society and to argue their responses in the face of criticism.

The Philanthropy.Insight Project is hosted by the Maecenata Foundation’s Tocqueville Forum. The scoping phase is generously supported by the Carnegie UK Trust.