On Monday, 16th May 2022, Dr. Udo Steinbach, Director at the MENA Study Center of the Maecenata Foundation, together with Dr. Anja Mihr from the HVGP (Berlin) and the OSCE Academy Bishkek, and Dr. Brigitte Weiffen from The Open University (UK) and Chair of IPSA Research Committee 34 “Quality of Democracy” hosted the conference „The Belt and Road Initiative (BRI) and its impact on Human Rights compliance along the ‚New Silk Road‚“. The conference was an all-day event taking place in the foundation’s library in the Rungestrasse 17, Berlin. The conference was comprised of four sessions which included a panel of two speakers each with ample time in the end for engagement with the online and in-person audience through a Q & A and discussion. 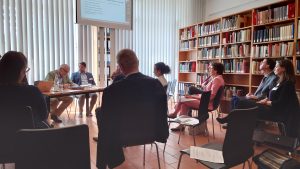 After an introduction to the event by Dr. Rupert Graf Strachwitz, founder and director of the Maecenata Foundation, Dr. Brigitte Weiffen and Dr. Anja Mihr, the first panel commenced on the topic of „The BRI and Human Rights in Eurasia“. The first panellist was Katja Drinhausen, Head of Program Politics and Society at the Mercator Institute for China Studies (MERICS) in Berlin. In her talk, she highlighted the difference in understanding of the term Human Rights. Whereas the West sees the term focussing on individual rights and development, China emphasizes the collective right to development and security. Dr. Udo Steinbach, the second panellist, added to this discourse on HR and connectivity in the area by adding the perspective of Turkish Eurasianists to the discussion. Turkey due to its shared history and culture with Central Asia has a profound interest in the activities in the region with Panturkish nationalists pushing for more influence in the region and the process of alienation from other states, such as the U.S., the E. U. and Arab states. The discussion mainly focused on a macro-perspective of Turkish pragmatism regarding the repression of Uighurs in China, and the extent to which values are present in investment and development deals.

The second panel, moderated by Dr. Rupert Graf Strachwitz, focussed on the topic of „Civil Society and the BRI“ and kicked off with input from Dr. Anja Ketels, Senior China Consultant at Marianne Friese Consulting. She discussed the process of internationalisation of Chinese NGOs and the conditions in which they operate, concluding that there is a wide typology of NGOs in China, but particularly their relationship with the Chinese Communist Party (CCP) plays a role in their activities and effectiveness. Adding to this notion of the influence of the CCP on civil society and further, individuals, Dr. Ralph Weber, Professor of European Global Studies at the University of Basel, portrayed how the terminology used regarding BRI by the Chinese resulted in the BRI not only providing infrastructure on the ground but also in our heads. The discussion was very lively and discussed topics, such as the narratives surrounding BRI, the risks of depoliticising, and the shrinking space Chinese civil society faces. 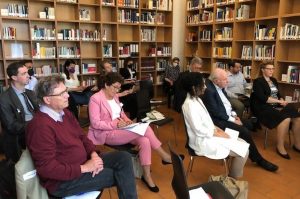 The third panel was moderated by Dr. Brigitte Weiffen and discussed the impact of BRI on Europe. It started with the insights from Dr. Matt Ferchen, Senior Fellow at the LeidenAsiaCentre and Lecturer at the Institute of Area Studies of Leiden University. He discussed the development of risk assessment and management of China regarding their international investments, finding that the complexities within the countries and some failed cooperations have made China more cautious of investing leading to more thorough risk assessments and some conditionality, partially informed by such activities of other states and actors, such as the World Bank. On the other hand, Dr. Birgit Wetzel discusses the EU’s involvement in the area with a particular focus on the first and second Central Asia Strategy of the EU. These strategies do not focus as much as BRI on infrastructure, but more on health management and education as factors leading to democratisation in the area which can be seen more in some states than in others. The discussion critically examined whether the EU’s involvement had an impact or rather fuelled the elites and authoritarian leadership. 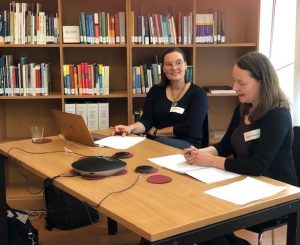 The fourth panel, moderated by Dr. Udo Steinbach, commenced with an online contribution by Dr. Jorge Heine, Research Professor at the Frederick S. Pardee School of Global Studies at Boston University and former ambassador of Chile to China, Russia and South Africa, about the global response to BRI. He talked about his personal experience in Latin-American response to the initiative and the great potential for development and alleviation of poverty it posed which led to increased cooperation between Latin America and China. Following his recount, Dr. Viktoria Akchurina, Senior Lecturer at the OSCE Academy Bishkek, gave the perspective of Central Asia on the BRI. This included the discussion of the fundamental trust issue that exists on the societal level showing in the population’s unsatisfaction and protest regarding China’s projects. As well as on the elite level regarding the threat to their sovereignty China poses as a strong military force with new rhetoric on how Central Asians countries aspire to return to China. The following discussion focussed on topics, such as Russia‘s and Turkey‘s role in the area in comparison to China and the credibility, or lack thereof, different actors in the region possess.

The conference finished with some concluding words from Dr. Anja Mihr and a big thank you to all that made the conference possible. 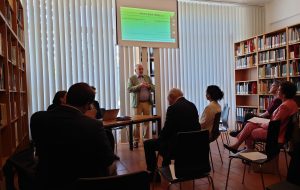 Projekt Europe and the Mediterranean
us@maecenata.eu

Anja Mihr is founder and Program Director of the Center on Governance through Human Rights at the HUMBOLDT-VIADRINA Governance Platform in Berlin. She is currently a DAAD Associate Professor at the OSCE Academy in Bishkek, Kyrgyzstan. More information: https://anjamihr.com/
kommunikation@maecenata.eu