Startseite / Startseite / Aktuelles aus der Stiftung / The House is in a State. Christian Wolffʼs Oeconomica in the context of public welfare.

The House is in a State. Christian Wolffʼs Oeconomica in the context of public welfare.

This study focuses on the last work of eighteenth-century philosopher Christian Wolff, the Oeconomica methodo scientifica pertractata, a rationalist guide to domestic morality. Born in 1679 in Breslau Wolff embarked on a splendid academic career, enjoying the support of contemporary luminaries like Gottfried Wilhelm Leibniz. He accepted a professorship for mathematics at Halle university in 1706 and soon expanded his range to include natural, theoretical and moral philosophy.(1) Wolff ultimately made a name for himself as one of the first scholars to systematically publish in the vernacular at a time when Latin still ruled the day at German universities; in fact, this made him a major figure to spread philosophy amongst the population at large in the eighteenth century.(2) Popular and controversial alike, he was expelled from Halle by Frederick Wilhelm I in 1721, the culmination of an enduring conflict with the theological faculty who dominated the university at the time. The scandal inevitably contributed to his fame; Wolff spent his exile in Marburg as a coveted professor, resisting the eventual pardon of the king. He only returned to Halle in 1740 with the accession of Frederick II where, amply decorated, he passed away in 1754 – midway through writing the Oeconomica.(3)

Although Wolff’s life is well-attested, his legacy is disputed: revered, reviled, yet indisputably famous throughout his lifetime, the maître à penser de l’Allemagne quickly lost in prominence thereafter. And even though Wolff left behind an immense oeuvre covering over 50,000 printed pages, spawned an eponymous movement with his methodology and furnished the German language with a philosophical terminology – in short, even though the impact of Wolffian philosophy can be considered a fact, his name is not as commonplace in modern academia as his erstwhile prominence would suggest.(5)

In fact, this discrepancy between lifelong prominence and posthu-mous oblivion is an oft-repeated theme in contemporary scholarship.(6) 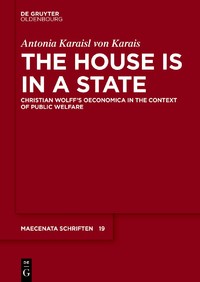