Civil Society in the Public Sphere: A Growing Role vs. a Shrinking Space

13th of July 2021 | via ISTR 2021 Global Virtual Conference | Virtual Event: Civil Society in the Public Sphere: A Growing Role vs. a Shrinking Space 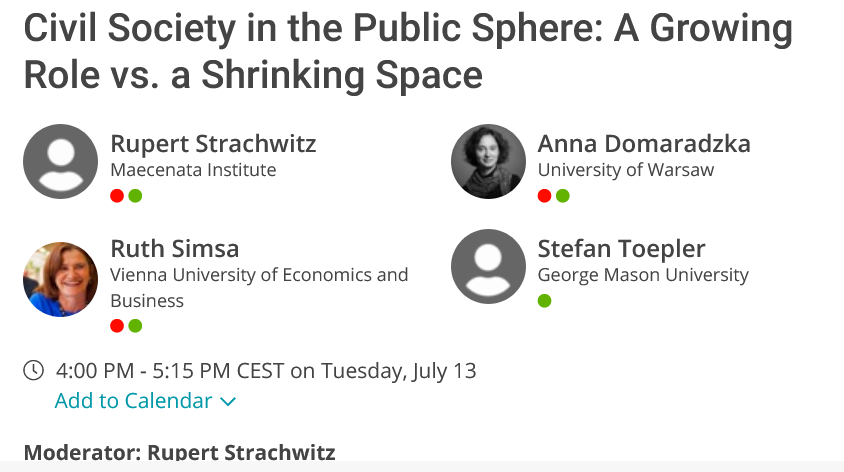 Since some years ago, a broad academic and public discussion over global indi-cators of a changing civic space may be observed. Narratives from the MENA region and from Central and Eastern Europe suggest that civil society functions of advocacy and deliberative democracy are under considerable pressure. However, while generally seen from a pessimistic perspective as a shrinking space, and with a focus on countries with authoritarian governance systems, two important and hitherto overlooked aspects have recently become overly apparent:

(1) The issue is neither restricted to the countries mentioned nor indeed to coun-tries with weak or non-existing democracies. On the contrary, it has been demonstrated that the space in which civil society actors and individual citi-zens may contribute to public affairs is meeting fundamental challenges in Western Europe.

(2) The space for civil society action is not purely a shrinking space. While in some areas of action, civic action is highly disputed, in others, the clout of civ-ic initiative is larger today than ever before.

Recently published evidence from Austria and observations from France, Ger-many, and the United Kingdom indicate a need for a broader discussion. Also, not least due to the successes of civic action in nudging them (e. g. Fridays for Fu-ture) , the hypothesis that governments are actively seeking to crowd out non-governmental actors from the public sphere by a whole range of regulatory, fi-nancial, and communicative instruments, to reduce them to supportive service provision, and/or create a ‚loyal‘ civil society to counterbalance an independent ‚voice‘, requires academic and public discussion. This discussion could center around the following issues:

(1) Is it fair to maintain, as has been suggested, that the issue of shrinking civic space is not restricted to certain countries we all have in mind, but is in fact universal?

(2) Will the efforts of governments to crowd out civil society be successful, or will they actually result in strengthening it?

Research currently undertaken in Germany will potentially add arguments to the above hypothesis and refute comparative studies that have been published. Some theoretical aspects that have been advanced will help to sketch out a global pic-ture. A comprehensive project that aims to observe the ongoing changes in the civil society space with an approach that is aware of its multilayered dimensions, challenges the ‚democratic/authoritarian‘ divide and looks at new forms of civic spaces will be introduced.