Observatorium 13 | 01.04.2017 | The concept of philanthropy is usually identified with the vertical flow of resources from those of high net wealth (the rich) to those of lesser means (the poor), as exemplified in the international aid system. In this familiar model, resources (typically financial) are provided by one community to assist or benefit another.

External resources are mobilised to address a deficit and fill a gap. While this is one key representation of giving and typically the first one that comes to mind when we hear the word “philanthropy” – meaning a “love of human kind”, it is not the only one. There is an alternative model based on the horizontal flow of resources from people within the same community. In this case, people held together by a shared identity, context and general situation mobilise the money, time and talent that exists within their community to assist or benefit one another. In this case existing resources are redistributed, getting them to where they are needed most. This practice, exemplified in selfhelp, reciprocity and mutual assistance, is typically found in cultures and contexts where the way of life is grounded in collectivism rather than individualism.
I shall argue that horizontal philanthropy is an alternative model to the more widely recognised vertical form and that is it indeed important. The first part of this paper describes horizontal philanthropy using an African perspective and the lived reality of the poor. This sets up part two, which is a consideration of why horizontal philanthropy matters, using the case of development practice. I shall consider the substance of horizontal philanthropy through a practical tool called the ‘horizontality gauge’2 ‒ an organisational behaviour measurement instrument developed for community foundations, an institutionalised form of community philanthropy found all over the world.

1: What is horizontal philanthropy?
Horizontal philanthropy3 , refers to people within a community, either as individuals or in a group, giving to one another to get the resources that they have to where they are needed most. This is done in order to address a problem or challenge in their own community that no one individual can tackle alone. In this instance, the “giver and receiver “are not separated, as they are from the same community and their exchange is not intermediated by an institution; rather it is direct ‒ person to person or group to group. Barry Knight highlights four distinguishing features of horizontality4.
It:

2: Why does horizontal philanthropy matter?
I shall now move from this foundational understanding of what horizontality is, to considering its contribution to development practice. I do this by describing a practical tool called the ‘horizontality gauge’. This instrument combines measurement, horizontal philanthropy, vertical philanthropy and the organisational behaviour of a community foundation. It is something I developed in the last five years with the help of six community grantmakers in South Africa.
The gauge allows community foundations to assess the extent to which they place community dynamics at the centre of their practice. It is a response to the finding of the Monitor Company Group7 that while the foundation model positions community as essential, it is seldom the case that community leadership, knowledge and favoured ways of working are leveraged and build from as a strategic advantage.
Thirty workshop participants from southern Africa8 reached a similar conclusion: “While organisations know about and are familiar with how communities help themselves, they seldom view it as ‘developmental’.” Participants went on to say that: “Grantmakers don’t start where communities are. We expect communities whether they are here or there, to come up to our level. But we don’t go to the level of communities”9.
The study findings maintain that the focus of community foundations is on building organisations rather than communities.
The primary concern is their own growth and sustainability. To shift this trend and address the “practice- aspiration” gap, community foundations need to take stock of how they work, determine what is out of line and correct it. This proposition proved problematic as, prior to the development of the horizontality gauge, there was no established way to do this. The field of community philanthropy did not have a set of signposts or measures to determine whether a foundation was taking the community dynamic into account. This is where an understanding of horizontality has been welcome and catalytic in enabling the development of a measure that was previously missing – namely a way to gauge the directionality, vertical or horizontal, of a community foundation’s behaviour. This advance is made possible by using the five dimensions of horizontality and juxtaposing them to verticality.
I shall unpack this, revealing how a comparison of the horizontal and vertical – that is how communities help themselves and how aid helps communities – can offer the sector five spectrum or ranges of behaviour against which foundation practice can be considered.
To start, Table 1 below compares the vertical and the horizontal against the five dimensions.
As you can see, the world is viewed differently by the aid industry and by communities. The vertical considers need to be a deficit or gap that is filled by adding more resources. 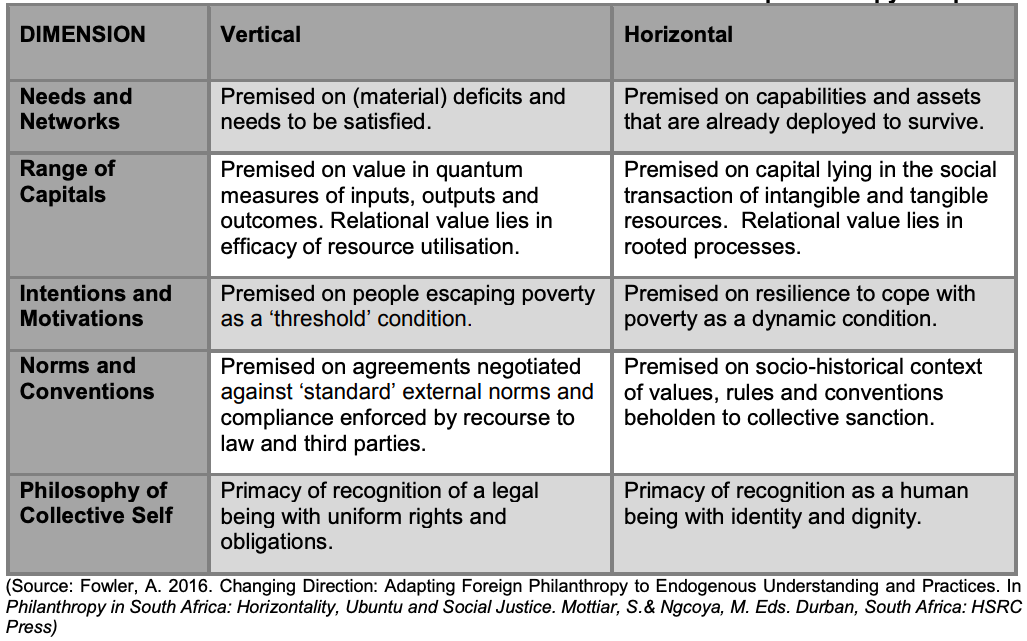 The tendency is to prioritise money and focus on how much ‒ viz. the quantum. Furthermore, verticality is concerned with helping people escape poverty and does so by entering into legal contracts and agreements detailing commitments related to inputs and outputs. Also from this perspective, people are approached as legal beings – citizens with rights. In contrast, communities are concerned with using and reallocating what they have to satisfy need and solve problems. They mobilise all types of capital available to them – not just money, and place value on the act of helping rather than the amount of help provided. Rather than being legally binding, community help is premised in social contracts, and grounded in accepted ways of doing things. Help can be given to maintain a situation (hold things level) or to advance – improving the situation. In horizontality, communities pay attention to identity and the dignity of people for a focus on their humanity.
On distinguishing between horizontality and verticality as being different and representative of two extremes of ends of a spectrum (see Figure 2 for a visual illustration of this), I combined this with Porras and Hoffer’s10 four elements of an organisation, drawing out the fundamentals of how organisations are set up and offering a framework for asking questions and selfassessing.
The first element considered is organising arrangements. These are the formal structures and systems used to manage an organisation, for example administrative and payment systems and policy and procedures such as the management of costs and information. Next, are social factors. These are the social processes that make up an organisation’s culture and can include values, how decisions are made, and how members of staff relate to both one another internally and to external stakeholders. Third is technical know-how. These are the inputs that an organisation uses to achieve a desired result. These “tools of the trade” could, for example, include financial grants or capacity building interventions such as training materials or a mentorship programme to assist a community group. It could also include the skills and expertise of staff members.
The last element is physical setting. That is, the location of the organisation, as well as its look and feel for both staff and external stakeholders, taking into account factors such as its size, accessibility and environment.
Using this as my framework – viz. the juxtaposition of verticality and horizontality using five dimensions and four elements of an organisation as points of interrogation, I then developed a 4×5 matrix and came up with 20 indicators of horizontality. These were turned into a series of questions for an individual questionnaire on organisational behaviour for completion by members of community foundations. For each question (as illustrated by the sample question in Figure 1), respondents scored organisational behaviour ‒ whether it was “more like this” (verticality) or “more like that” (horizontality) ‒ and then had to provide an example to substantiate the score.

The responses to all questions for all the respondents were combined and plotted visually on a philanthropic arc in Figure 2, revealing something about the horizontal or vertical direction of organisational behaviour.
You can see that the arc is structured on a vertical and horizontal axis providing a spectrum of behaviour ‒ at one end anchored in the aid industry’s favoured way of working and at the other end community bias, and made up of five arcs based on the five dimensions. The A to E quadrants on the arc mirror the scoring options on the five-point Likert scale used in the questionnaire and signalled in Table 1. The illustrative example used reveals that the organisation in question has a strong horizontal pull as shown by the score of 27 and 34 in quadrants C and D respectively and a weaker vertical pull as shown by a score of 15 and 1 in quadrants B and A respectively. 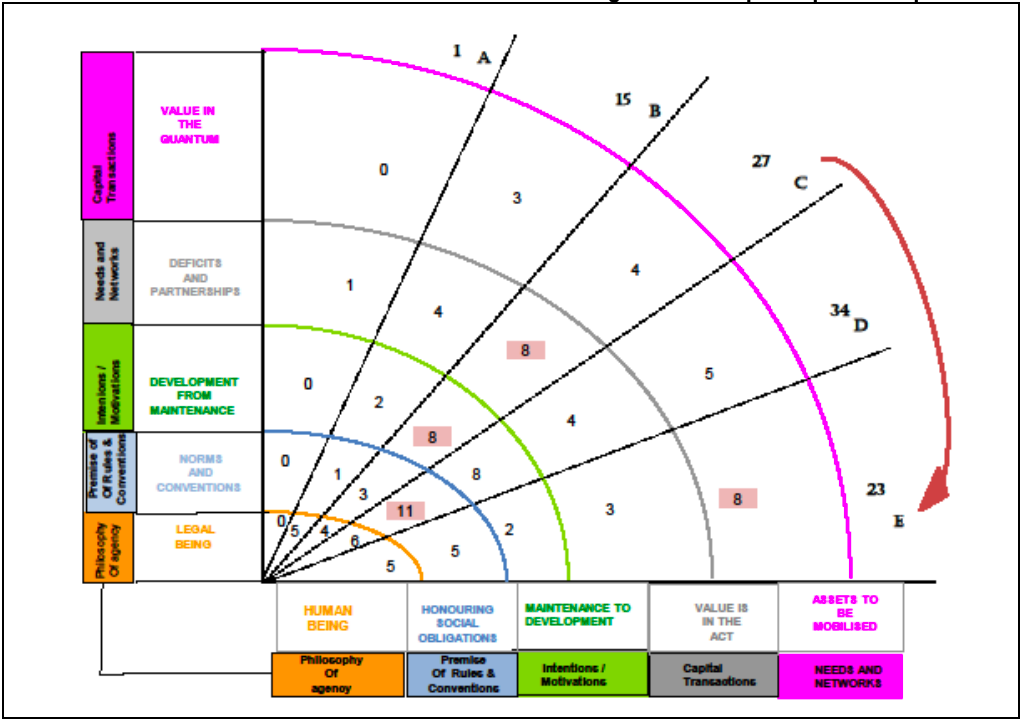 The visualisation of the scores is unpacked with organisation members in a facilitated conversation or member check:

The process of completing and discussing the questionnaire takes a maximum of three hours and allows for a new kind of reflection and internal conversation. Specifically, it offers organisations an organisational development tool that can be used longitudinally, tracking changes in behaviour over time. It can also offer donors and membership networks of community foundations an instrument to add to their monitoring and evaluation toolkit, enabling them to measure behaviour and performance across organisations – joining the dots for a sector-wide appreciation of the directionality of behaviour.
The example of the horizontality gauge is only one way in which horizontal philanthropy in the African context has been applied to practice. Yet this example may deepen your understanding of the substance of horizontality and its importance to the practice of institutionalised community philanthropy. Additionally, it may peak your curiosity and interest in reflecting further on the contexts in which you work for a systematic understanding of the community dynamic and what it could mean for your own practice.

Conclusion
In engaging with horizontal philanthropy as an alternative to the more familiar vertical model philanthropy, we have to address a number of implications which arise and test our understanding.
Firstly, the language we use in philanthropy becomes problematic. Horizontal philanthropy offers an alternative way to understanding philanthropy – yet it is hard to grasp this coexisting possibility when operating within the confines of the “old’ mainstream or conventional philanthropy language. In short, the term ‘philanthropy’ does not work – givers rich and poor on the African continent, and possibly in other contexts, don’t identify with it. Accordingly, horizontality brings with it the need to change the terms and language used. So this takes us back to words like ‘help’, ‘giving’ and ‘gifting’.
Secondly, horizontality challenges us to reflect on the term ‘institutionalisation’ and what is meant by it. The term ‘institutionalised philanthropy’ is widely used as a reference to the formal and registered. Though horizontal philanthropy does not comply with these criteria, its expressions are widely recognised and exist in known forms ‒ perhaps this too is ‘institutionalisation’ and the framing of the concept would therefore have to be broadened.
Next is the issue of theory. Until we integrate experiences outside of Europe and America into philanthropic theory, the field will continue to operate with prejudiced and incomplete understandings and concepts. To make theory in philanthropy stronger, work in theory building needs to be polycentric ‒ having multiple centres of importance and consideration.
Finally, I shall end by stressing the issue of scale and magnitude. Practices of self-help and mutual assistance that characterise horizontal philanthropy are organic and practised not only in Africa but also in other parts of the world. It is a widespread rather than unique phenomenon. Its scale should not be underestimated, as disregarding it would be to turn our backs on a massive phenomenon.