Home / About Us / MENA Study Centre

Since its establishment (1997), the Maecenata Institute has dealt with themes that touch on aspects of the Islamic religion, including societies shaped by Islam, such as intercultural/ interreligious dialogue as well as civil society aspects of the tasks performed by Islamic organisations in Germany within the area of philanthropic and civic engagement. With the founding of the Europa Bottom-Up programme (2011), the Foundation was able to expand its engagement with Islamic culture and the Mediterranean region. The Maecenata Foundation’s other planned projects include work with the MENA region and spaces influenced by Islamic culture, especially to further strengthen civil societal, intercultural and interreligious dialogue and the position of religious and ethnic minorities in Europe and in the Middle East.  Networking with the potential of other organisations is an important requirement for successful work and visibility in the political arena.

At the intersection between science, practice and politics, the MENA Study Centre

The trilateral Wasatia Graduate School, which was created in cooperation with the Maecenata Foundation, the University of Cambridge and the Wasatia Graduate Institute in Jerusalem (wasatia is Arabic for balance, understanding, and has already been established in Jerusalem as an Israeli-Palestinian education programme), is unique in German higher education, both thematically and methodically.

>> The European Wasatia Graduate School for Peace and Conflict Resolution

Karabakh Dialogue Forum. In search of bridges for Armenian-Azerbaijani reconciliation

Against the backdrop of the recent Karabakh conflict, Dr Steinbach, Dr Birgit Wetzel and Prof Dr Eva-Maria Auch responded to a discussion format that had begun around 8 years ago, but was not pursued due to a lack of up-to-date information.

The starting point is the assumption that Germany can play a special role in the mediation process and start a trialogue aimed at long-term reconciliation. The focus was on a meeting of representatives of different professions from Armenia and Aerbaijan, who, with the help of mediators, presented their interethnic experiences in Berlin, discussed common ideas for living together and developed concrete suggestions for the first steps towards rapprochement or cooperation. German specialists in development cooperation (politicians, entrepreneurs and academics) acted as mentors. The project unfolded in three stages: (1) Awareness raising and preparation of an “empathetic dialogue” (2) Trialogue meeting between business and civil society actors from Armenia, Azerbaijan and Germany (3) Presentation of the results to the public (a joint position paper for German/ European and national decision-makers is in preparation).

Whatever diplomatic solutions that are pursued in the future will only be viable within the context of a reconciliation process between Armenia and Azerbaijan. Thisis not only based on a willingness to engage in dialogue at the highest political level, but must also be anchored in broad sections of the population. Establishing lasting pece requires the difficult and painful overcoming of barriers to (re)approchement among both Azerbaijanis and Armenians. The project makes the assumption that Germany, as a member of the OSCE Minsk Group, can play a special role in the mediation process and establish a trialogue aimed at long-term reconciliation; hardly any other country has greater experience in coming to terms with its past as a requirement for rapprochement and reconciliation.

“A Poet in desperate times”? – Voices of Arab authors in Germany

Arab intellectuals, artists and writers have had long-standing painful experiences of emigration and exile. Many of them also live in Germany. Their literature is a balancing act: still taking part in intellectual and political life in their homeland, while simultaneously gaining an artistic voice in German society. At a time when emigration – not least from Arab countries – is accompanied by social tensions, Arab authors try to build a bridge and to contribute to a climate that is open to cultural encounters.

Integration in Germany – better than its reputation

Equal participation and balancing the interests of people with and without a migrant background are essential for a prosperous coexistence in an immigrant society. Empowering those with a migrant background and their allies, as well as raising awareness of people in established structures of their own responsibility are important strategies to eliminate the disparities that still exist. What role do empowerment, resilience and solidarity play for good and equal coexistence? The opportunities, but also the problems of our community should be explained by people who have successfully found their place within it.

For a period of four weeks in September 2021, Dr Hind Arroub, Morrocan political scientist and human rights activist, completed a research stay in Berlin, which was co-organised by the MENA Study Centre. Dr Arroub recieved a scholarship from the Federal Foreign Office for this. She is the founder of the independent and interdisciplinary think tank ‘Hypatia of Alexandria Institute for Reflexion and Studies.’ During her time in Berlin, she gave a lecture in cooperation with the German-Arab Friendship Society on the topic “Nine Years After the Arab Uprising: Freedom of Expression Still Not Welcome,” at the Maecenata Foundation’s premises and published an essay in the Opuscula series.

The event’s theme was ‘Ecology and Environmental Policy in the Middle East: Concepts and Crises.’ Its backdrop was worrying events, such as large bodies of water drying up (such as Lake Urmia), the lack of clean drinking water for large parts of the population and the prospect that agriculture, fisheries and urban structures in the entire region will be severely impacted by climate change in the future. What is the level of awareness for these phenomena in the region? What measures are being taken? Can we identify cultural or religious behaviours when dealing with them?

>> Read the event report (in German)

>> News from the MENA Study Centre 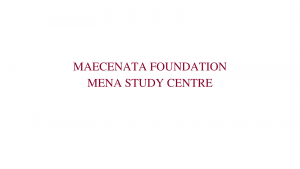 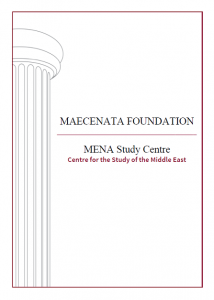