For fewer and fewer people the reality of life does not end at national borders. However, finance and tax policy are still dominated by the nation state. One looks in vain for uniform regulations, for example on the deductibility of donations made for organisations outside of one’s own country. This problem does not only affect German taxpayers. In most European countries, cross-border donations are less attractive from a tax point of view and are often doubly disadvantaged, due to increasing bank fees. Even the relevant legislation of the European Court of Justice did not really change this situation.

The Transnational Giving Europe Network (TGE) was set up in 1999 in order to counter this situation and promote transnational donations within Europe.

The Maecenata International “registered association” has acted as the German partner within the TGE-Network since 2001. Subsequently, the Transnational Giving Programme (TG) has been integrated into the Maecenata Foundation to take over these tasks in 2011.

Since then, TG has been a central pillar of the Maecenata Foundation’s activities. Funding under this programme has been awarded to recipients around the world for a long time. These include, for example, major American universities and the United Nations World Food Program as well as grass roots organisations in the Global South. In addition to private donors and companies, foundations are also increasingly using the mechanisms of the TG-Programme for their international funding activities.

The aim of the programme is to promote philanthropic activity through cross-border donations and to strengthen the networking of non-profit organisations. In addition, the TGE network, together with international partner organisations and networks, critically monitors and accompanies the developments in the 66 individual countries and in Europe as a whole – both for donors and for the civil society organisations that receive donations.

This means that the foundation’s work increasingly intersects with the topic of shrinking space for civil society, which the Maecenata Institute has been researching since 2015.

The network now comprises 21 countries, each with a partner organisation. 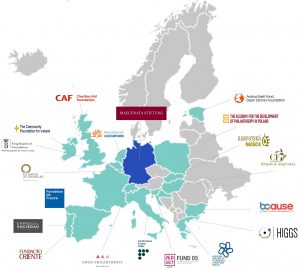